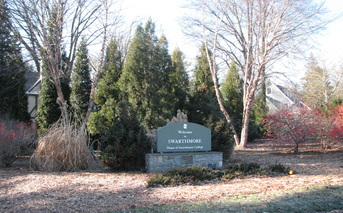 In late 2012, the Swarthmore Centennial Foundation generously provided a $10,000 gift to renovate Gateway Park. The funds will be used to preserve the park's key plantings, enhance its visual impact, and save on costly watering and the seasonal replanting of annuals. The Foundation has been a consistent benefactor to Gateway since the creation of the park in 2002. In that year, the Foundation--with an earmarked gift from an anonymous donor-- purchased the Gateway site for the Borough, and the Foundation has funded the replanting of Gateway's flower beds each season since 2002.

WHY a Renovation now? 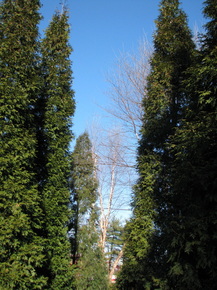 Evergreen screen - winter 2012
Since its inception in 2002, Gateway has grown into a beautiful lush entryway to the borough, but its fortunate fecundity eventually turned into too much of a good thing. By 2011, overcrowding and invasive species threatened the continued survival of the larger plantings. Costly tree removal and pruning were required to preserve the evergreen screen and the park's overall appearance. Moreover, increasing environmental awareness pointed to the need to reduce water consumption and introduce hardier plants that could take on the challenges of road salt and drought. These concerns prompted the Swarthmore Horticultural Society to approach the Swarthmore Centennial Foundation with a detailed proposal for the park's renovation, and the Foundation once again came to the aid of Gateway by providing the needed financial assistance to refurbish the park.

What Changes to expect in 2012 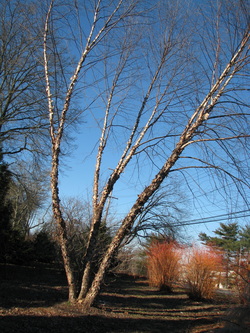 ❁  Addition of large drifts of ornamental grasses and perennials to create a hardy
flowering meadow. See below for the specifics.

Revisit this site often to keep abreast of Gateway developments!

SHS's role in the Creation and revitalization of Gateway

The SHS has been involved in the design and maintenance of Gateway Park's flower beds since that park's inception. Mimi Le Bourgeois served as the first SHS Garden Manager of Gateway, from 2003 until 2010.  In addition to planning the flower beds of Gateway, Mimi was instrumental in recruiting the corps of dedicated volunteers who have replanted and maintained the Gateway Park flower gardens for almost a decade. Cricket Brien, who became SHS Garden Manager for Gateway in 2010, continues this important work and will play a key role in designing  and supervising the proposed Gateway renovations.  If you'd like to volunteer your services to help transform Gateway, contact SHS at swarthmorehortsociety@gmail.com.
Proudly powered by Weebly